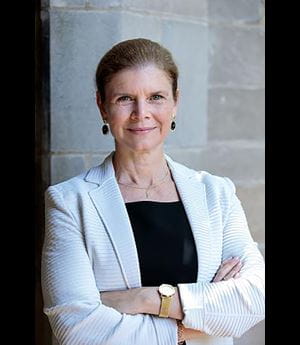 Angela V. Olinto is Dean of the Division of the Physical Sciences and the Albert A. Michelson Distinguished Service Professor in the Department of Astronomy and Astrophysics, the Kavli Institute for Cosmological Physics, and the Enrico Fermi Institute at the University of Chicago. She previously served as Chair of the Department of Astronomy and Astrophysics from 2003 to 2006 and again from 2012 to 2017.

Olinto is best known for her contributions to the study of the structure of neutron stars, primordial inflationary theory, cosmic magnetic fields, the nature of the dark matter, and the origin of the highest energy cosmic rays, gamma-rays, and neutrinos. She is the Principal Investigator of the POEMMA (Probe Of Extreme Multi-Messenger Astrophysics) space mission and the EUSO (Extreme Universe Space Observatory) on a super pressure balloon (SPB) mission, and a member of the Pierre Auger Observatory, all designed to discover the origin of the highest energy cosmic particles, their sources, and their interactions.

Olinto received a B.S. in Physics from the Pontifícia Universidade Católica of Rio de Janeiro, Brazil in 1981, and Ph.D. in Physics from the Massachusetts Institute of Technology in 1987. She is a fellow of the American Physical Society and of the American Association for the Advancement of Science, was a trustee of the Aspen Center for Physics, and has served on many advisory committees for the National Academy of Sciences, Department of Energy, National Science Foundation, and the National Aeronautics and Space Administration. She received the Chaire d’Excellence Award of the French Agence Nationale de Recherche in 2006, the Llewellyn John and Harriet Manchester Quantrell Award for Excellence in Undergraduate Teaching in 2011, and the Faculty Award for Excellence in Graduate Teaching in 2015 at the University of Chicago.