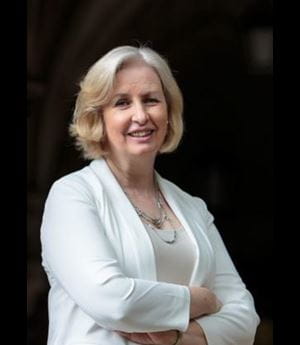 Anne Walters Robertson is the Dean of the Division of the Humanities and the Claire Dux Swift Distinguished Service Professor in the Department of Music and the College.

Robertson’s highly interdisciplinary research is focused on the music of the middle ages, with a particular concentration on 15th-century sacred polyphony, the 14th-century French composer Guillaume de Machaut, French medieval liturgical music, ceremony and architecture, and music and mysticism. Her publications include Guillaume de Machaut and Reims: Context and Meaning in His Musical Works (Cambridge, 2002), and The Service Books of the Royal Abbey of Saint-Denis: Images of Ritual and Music in the Middle Ages (Oxford, 1991), and many prominent articles.

For her scholarship, Robertson has been awarded the H. Colin Slim Award (2007), the Otto Kinkeldey Award (2003), and the Alfred Einstein Award (1989) by the American Musicological Society. She is the only winner of all three book and article prizes of the Medieval Academy of America. She was elected a fellow of the American Academy of Arts and Sciences in 2008 and a member of the American Philosophical Society in 2015.

Robertson received her Ph.D. from Yale in 1984 and joined the faculty at Chicago that same year. She has been involved in the work of the broader University community and professional organizations throughout her career. She served as Deputy Provost for Research and Education (2001-4), Chair of the Music Department (1992-98, Winter 2008, 2014-2016), Co-Chair of the OPUS Campaign of the American Musicological Society (2005-9), and President of the American Musicological Society (2011-2012).

Robertson regularly teaches Music in European Civilization in the College, as well as courses on medieval music in context and the music of fin de siècle France.