Executive Vice President of the University 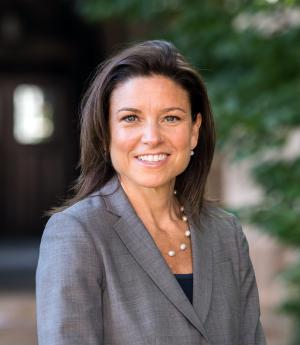 As Executive Vice President of the University, Katie Callow-Wright is the senior vice president of the University, the principal representative of the Office of the President, and the convener for major planning efforts and programmatic initiatives that engage multiple administrative offices. She oversees a broad range of work and offices including campus master planning, architectural design for major capital projects, Facilities Services, the Office of University Events and Ceremonies, executive recruitment and compensation, the Rubenstein Forum, and the Quadrangle Club. As the officer of the University with responsibility for facilitating and implementing strategic initiatives that require significant central coordination, her work intersects with a number of areas including communications, development, commercial real estate, and institutional partnerships, among others.

Callow-Wright has broad responsibility in areas such as policy development and executive communications and leads projects and initiatives at the direction of the President, working in close collaboration with other senior leaders of the University, and the Board of Trustees. She also oversees presidential activities related to development and free expression.

Callow-Wright has more than twenty years of experience in higher education, with previous appointments in student life at Baldwin Wallace College and Colorado College. She holds a bachelor’s degree in economics from DePauw University and a master’s degree in education from Bowling Green State University.