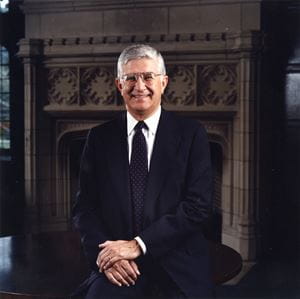 Don Michael Randel began his tenure as the President of the University of Chicago on July 1, 2000. After leaving his post on July 1, 2006, he assumed the presidency of the Andrew W. Mellon Foundation.

Randel came to Chicago after 32 years at Cornell University, where he had served as a faculty member in the department of music and in many administrative posts, including department chair, vice-provost, and associate dean and then dean of the College of Arts and Sciences. He became provost of Cornell University in 1995.

After becoming President, Randel led efforts to strengthen the humanities and the arts on campus, as well as a broad range of interactions with the city of Chicago and a further strengthening of the University’s programs in the physical and biomedical sciences and its relationship with the Argonne National Laboratory. He also led the Chicago Initiative, an ongoing campaign for $2 billion, the largest in the University’s history, which has raised more than $1.3 billion toward its goal with the help of $217 million in pledges in 2004.

Randel said he was particularly proud of his appointment of a considerable number of “very talented deans and administrative officers who have greatly strengthened the University as a whole and who can be counted on to work together to ensure a great future for the University as well as for the units for which they have personal responsibility.”

During Randel’s presidency, substantial improvements to the University’s facilities also were completed, including the Palevsky residence halls, the Ratner Athletic Center, the new Graduate School of Business and the $200 million Center for Integrative Sciences, the largest building in the University’s history. “These are valuable additions to the University’s physical capital, begun by many good people under my predecessor, Hugo Sonnenschein, and I am proud to have helped maintain the momentum for their conclusion,” Randel said.

The University also completed several joint programs with the city along the Midway. And it opened in its neighborhood a highly successful charter school, which has now been joined by another, under the auspices of the University’s Center for Urban School Improvement. The University also has launched the Collegiate Scholars Program, a College bridge program aimed at preparing Chicago public school students for elite academic institutions.

The University is, I believe, the supreme example of what a university dedicated to the fundamental ideals of intellectual inquiry and expression should be. Its unique profile on the landscape of higher education derives in great degree from its commitment without compromise to an intellectual tradition of the highest order.
— Don Michael Randel

Randel also encouraged a greater awareness of the value of diversity, and in 2004, with Provost Richard Saller, he issued a statement on diversity that concluded, “The University (has) made some progress; we now need to raise our aspirations, to monitor our improvements, and to confront our shortcomings. Our higher aspirations will be met only with the focused effort of the whole campus community.”

In the spring of 2005 , Randel was one of three university presidents to receive an award for “Academic Leadership” from the Carnegie Corp. of New York.

The foundation cited, among other things, Randel’s leadership in enhancing undergraduate research opportunities and his work to create a strong network on Chicago’s South Side between schools, the community and the University.

One aspect of Randel’s leadership noted by Carnegie Corp. president Vartan Gregorian was his support of undergraduate research, of which the University is one of the country’s most enthusiastic supporters. And during the past several years, it has further expanded the breadth of research opportunities available to students in the undergraduate College.

Gregorian also singled out Randel for his support of school reform initiatives. Not only has Randel enthusiastically supported the University’s innovative charter school in Chicago’s North Kenwood community, he also has vigorously advocated for world-class academic opportunities for students enrolled in Chicago’s public schools.

At his appointment as President in 2000, Randel said he had been approached over the years to consider other presidential positions but always resisted leaving Cornell University. “I could only make this decision because of the extraordinary character and quality of the University of Chicago,” he said.

In a 2002 meeting of the Council of the University Senate, President Randel spoke on the University’s policies regarding free speech and intellectual discourse. Citing the Kalven Report of 1967, Randel began by noting that the University “must embrace, be hospitable to and encourage the widest diversity of views within its own community.”

But he added that as a community, the University must also maintain “a decent respect for one another and even a degree of trust. No set of rules or codes of behavior can ever fully capture everything that respect and trust require. Maintaining this community is hard work, and each of us must assume some personal responsibility for it.

“In a world of increasing tensions and heated differences,” he continued, “we will sometimes be accused of bias or even rank prejudice for tolerating a wide spectrum of views,” he said. “But the response to views that one finds distasteful is not in the first instance to attempt to suppress them but instead to answer them with the force of argument.”

After speaking of the importance of combating prejudice, he noted the related virtue of diversity, both of ideas and of experience. “No part of the University community can think of itself as immune from this concern for diversity,” he told the Council. “An unprecedented number of programs is in place to increase diversity in the functioning of our academic programs and in the ways in which we carry on our business affairs and our relations with the neighborhood and city of which we are a part. Each of us must believe that embracing — not merely tolerating — diversity is a personal obligation.”

From The University of Chicago News Office archive.