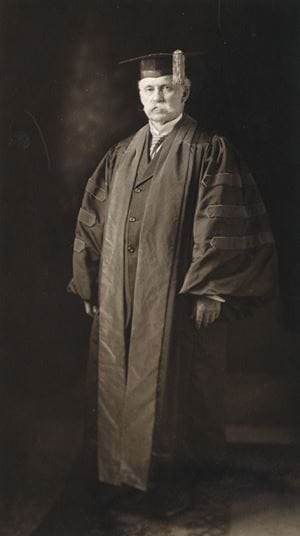 Harry Pratt Judson was one of many educators tapped by William Rainey Harper to begin the work of the University of Chicago. A school principal in Troy, New York for fifteen years, and professor of history and pedagogy at the University of Minnesota for seven, Judson had the breadth of experience Harper wanted. Judson was attracted by Harper's academic plans, but after visiting the "wilderness" in Hyde Park which was to be the University campus, he wasn't quite sure he shared the vision. "There was much in the air, but not much in the ground," he recalled later.

Judson's reticence was expressed too late, for Harper announced his appointment to the press before Judson had actually agreed to move to Chicago. Sharing his apprehensions, the University of Minnesota regents granted Judson a one-year leave of absence and invited him to return in case the experiment in Chicago came to naught.

The University for sixteen years has had a balanced budget and the policy is so firmly established that it is extremely unlikely that the reverse will occur again.
— Harry Pratt Judson

After Harper himself, Judson was in fact the second faculty member to begin work in Chicago, arriving in June 1892 to help organize the myriad details of the educational program before classes began in October. Judson's own field of study was constitutional law and the history of diplomacy, and he became the first head of the political science department. In 1894 he was appointed dean of the faculties and continued to work closely with Harper on many aspects of University administration for more than ten years. As a member of Delta Kappa Epsilon, he was also instrumental in pressing for the acceptance of fraternities at the University.

Once the terminal nature of Harper's illness became known, Judson assumed an increasing burden of administrative responsibility. Appointed acting president immediately upon Harper's death in early 1906, Judson was named president in his own right by the trustees a year later. Judson's conservative fiscal policies came as a relief to the Rockefellers, who had grown steadily more concerned about the University's annual deficits. Within two years of his appointment, Judson brought the University's budget into balance, and he maintained it in the black for the remainder of his administration.

Judson's cordial relations with the Rockefellers led to his involvement in several of the family's philanthropies, including the Rockefeller Foundation and the General Education Board.

At the University, Judson presided over a period of consolidation and sustained growth for the young institution, as the budget tripled and the student body grew from 5,070 to 12,429 between 1907 and 1923. New buildings for geology, classics, and the general library were constructed, and thanks in part to the personal contacts made by Rebecca Judson, a lavishly decorated center for the University's women students was completed. The dedication of Ida Noyes Hall in 1916 provided a centerpiece for the University's Quarter-Centennial, a celebration which honored the institution's accomplishments and confidently proclaimed its future promise.

The year 1916 also saw $5.3 million raised by the Judson administration for a new medical school and hospital, as well as the groundbreaking for a theological building. Unfortunately, the world war intervened and delayed these and other plans, which were not taken up again until the 1920s. Judson enthusiastically supported efforts to aid the war work. Students and faculty who did not enlist in the military, the ambulance corps, the Red Cross, or the YMCA were encouraged to drill on the University's athletic field. Faculty members used their special skills in military or homefront activities, including cryptography for U.S. Military Intelligence, economic consulting for the U.S. Shipping Board, and scientific work for the National Research Council. Judson himself served on the draft board for northern Illinois, and in 1918 he visited Persia with the American-Persian Relief Commission, which aided Syrian and Armenian refugees who fled the Turkish and Russian armies.

Judson retired in 1923 at the age of 73, assured that the University was on sound financial footing and that its future was secured.