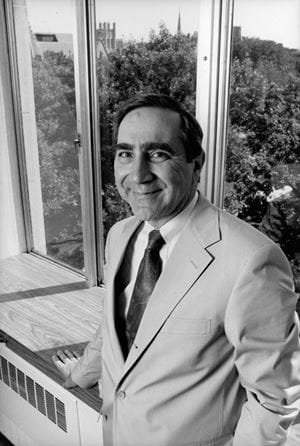 Sonnenschein initiated substantial enhancements of the University’s financial health, its facilities and its public profile, especially among prospective students. He established and launched a plan to gradually increase the size of the undergraduate College at the same time the faculty revised its curriculum, and he instituted the first campus master-planning process in 30 years.

The University of Chicago is a precious asset, and it has been a distinct privilege for me to lead it into the next millennium.
— Hugo Sonnenschein

Sonnenschein became President of the University of Chicago on July 1, 1993, after having served as provost of Princeton University and dean of the school of arts and sciences at the University of Pennsylvania. During his presidency, Sonnenschein raised expectations for fund raising from the University's alumni and friends; substantially reinforced the recruitment of the nation's best students; developed a strategic plan to continue the expansion of the undergraduate College begun under previous presidents; and devoted substantially greater resources to the construction of new facilities and to improving the quality of campus life.

Our alumni and friends have brought us to a new era in which they insist that Chicago have the resources to do the very best, most important and most necessary work. The remarkable growth in their support is what is needed to maintain a university of such exceptional quality. It also is a foundation on which we will build still greater achievements in teaching and discovery.
— Hugo Sonnenschein

Among his achievements were the strengthening of the faculty, as evidenced by recruiting of new faculty in the Law School and Mathematics Department that has been called among the best of the decade at any university, and a continuing string of awards over the last five years of his tenure, including two Nobel Prizes, a Pulitzer Prize and the National Medal of Science.

Chicago's students also continued to be recognized as among the very best in the nation during this period; College students won multiple Rhodes scholarships under Sonnenschein. And a study conducted prior to Sonnenschein's departure of Ph.D. recipients in the social sciences and humanities appointed to full-time, junior-level faculty appointments at universities around the United States placed University of Chicago students first in the nation in 14 of 21 fields studied and second in 6 of the 7 remaining fields.

While maintaining the strength of the University's renowned graduate programs, Sonnenschein initiated a program to improve the attractiveness of the undergraduate College to the most intellectually serious students. At the same time, curricular developments, including the faculty revision of the curriculum, now provide substantially greater opportunities for learning foreign languages and studying abroad.

Many of the facilities improvements initiated by Sonnenschein fell under the aegis of the Campus Master Plan, only the fourth in the University's 108-year history. That plan guided the construction of the Gerald Ratner Athletics Center – the first new athletic facility in more than 50 years at the University. It also led to a new campus for the Graduate School of Business and increased capacity for the University's library. It brought improved facilities for the physical sciences research institutes and an entirely new Institute for Biophysical Dynamics to study scientific problems at the boundary between the biological and physical sciences. The Max Palevsky undergraduate dormitory was also built as a result of this Plan, as well as new facilities for the University Press.

Other facilities improvements under Sonnenschein included the 1997 designation of the University campus as an official botanic garden, a renovation of the Reynolds Club to create a student center, greatly improved career-counseling services and greater resources for the campus's many student organizations.

From The University of Chicago News Office archive.