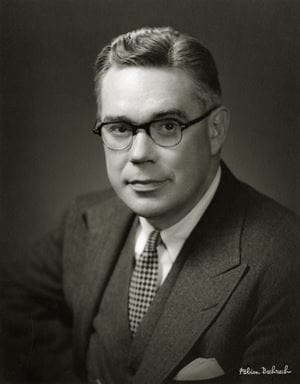 Standing six feet two-and-a-half inches tall, barely 40 years old, Lawrence Kimpton seemed the natural successor to Robert Hutchins, who had passed 50 by the time he resigned. With his PhD in philosophy and teaching experience at an elite junior college, Kimpton seemed likely to carry on the Hutchins traditions with little change, even if his philosophy drew more from Kant than from Aristotle. Kimpton grew up in Kansas City and attended college at Stanford. After completing his doctorate at Cornell in 1935, he took a job teaching English, German, and philosophy at Deep Springs College in California. Deep Springs was an experimental school with about 20 students and the same number of teachers situated on an isolated 250-square-mile ranch with 1,000 head of cattle. Students studied in tutorials and small discussion groups and worked half of each day on the ranch. Kimpton became dean and director of the college, which involved rounding up steers and catching rustlers as well as more routine educational duties.

In 1941 Kimpton moved to Nevada to operate a ranch for a year, and then accepted a position at the University of Kansas City as dean of the College of Liberal Arts. When the Manhattan Project office in Chicago needed an administrator, Kimpton's name was offered by chemists who had taught at Deep Springs while they were graduate students at Caltech. He moved to Chicago in 1943.

A vacancy in the dean of students office led to Kimpton's first meeting with Robert Hutchins. He later recalled Hutchins's questions: Don't you think the University is lousy? Don't you think the great books are great? And isn't the function of an educational institution to educate? Kimpton assented to these propositions, so Hutchins asked, do you know anything about student personnel administration? Kimpton replied, not a thing. At this, Hutchins arose, shook his hand, and congratulated him on being the new dean of students.

In 1947 Kimpton moved to Stanford University to become dean of students there. After three years, Hutchins invited him back to the University of Chicago, this time as vice-president in charge of development. By the end of the year, though, Hutchins announced his intentions to resign. Kimpton contemplated returning to Stanford, but within a few months the Board of Trustees announced that he was their choice to replace Hutchins as chancellor.

Kimpton had returned to the University of Chicago because of Hutchins and was disappointed to find out he was leaving. But, as chancellor, Kimpton immediately became aware of the problems that Hutchins was leaving behind. The College bachelor's degree was suspect; donations were drying up because many of the University's corporate sponsors had been alienated or neglected; and deterioration of the neighborhood made it increasingly difficult to attract both faculty and students. Quick action was required, and Kimpton saw himself as the one who must act to ensure the University's survival.

Kimpton's administration achieved many of its budgetary objectives. The University had run deficits nearly every year since the depression hit. Three years of budget cuts and stringent review under Kimpton, however, brought the budget into the black by 1954. A development campaign was launched in 1955 which raised badly-needed funds for building and endowment while increasing awareness and support in the Chicago business community and strengthening bonds with alumni. As a result, annual expenditures doubled, while 15 new buildings were constructed and others renovated. Between 1955 and 1960, faculty salaries were raised 30 percent.

The neighborhood was another concern. Housing stock in Hyde Park, most of which was built between the 1890s and 1920s, had not been maintained during the depression and war years. Older houses had been divided into smaller apartments, swelling the population and causing problems with sewers and traffic. Racial tensions increased as African-Americans moved from the old "Black Belt" areas into Englewood, Woodlawn, Kenwood, and Hyde Park itself. Crime increased. More and more faculty members chose to live in the suburbs, raising fears that the University would become a commuter campus.

Some Hyde Park activists criticized the University's approach for overshadowing community efforts begun some years earlier. Others, however, recognized that the University's power, money, and prestige were crucial in pulling together the government and private resources needed for redevelopment. Once the University committed itself, things happened quickly, sometimes more quickly than the community expected. Chancellor Kimpton's personal attendance at weekly and even daily meetings with community leaders persuaded them that cooperation was possible and necessary. Reflecting fifteen years later, Kimpton acknowledged that the urban renewal program did not solve the problems of the city's slums — only that it had saved the University.

The University has always been a pioneer, striking out into new country, and, like the pioneer, often with little or no company until it had cut new paths. If the University has faults, they are the errors of commission rather than of omission.
— Lawrence A. Kimpton

While the graduate divisions remained strong, the College, which had received intense interest during the Hutchins years, faced troubles from both outside and inside the University, due as Kimpton put it to a lack of "articulation with the basic structure of American education." Secondary educators felt threatened by the University of Chicago plan to accept high school juniors into college, and other colleges and graduate schools were suspicious of University bachelor's degrees which were granted to college sophomores. Some University professional schools even refused to admit graduates from the College. Facing declining enrollments due to the Korean War draft and a smaller population of depression-born youth, Kimpton felt the College could not remain outside the mainstream of American education. In the face of strong resistance, the "Four-Year" program was therefore dismantled, and the College adopted a more conventional BA program.

In 1960, with the University on firm financial and academic footing once again, Kimpton announced his resignation, stating that he had accomplished what he had set out to do, and it was time to move on: "My conviction is that the head of such a university as this one can do his best work for it within a reasonably short time. The University every so often requires a change in leaders who can apply fresh and sharply objective appraisals, and start anew, free of the associations, friendships, and scars of a common struggle." Kimpton had no interest in running any other university, and instead took an executive position with Standard Oil of Indiana, where he stayed until he retired for reasons of health in 1971.