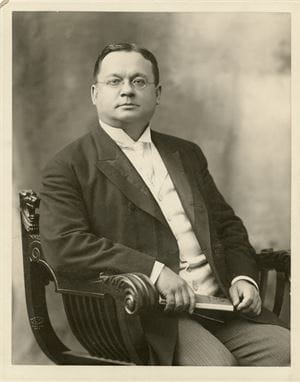 William Rainey Harper grew up in New Concord, Ohio, in a Scottish Covenanter family and community that valued education. He learned to read when he was three, entered college at ten, received a BA degree at fourteen and a PhD at eighteen. He also loved music, played the piano with the college president's daughter, and led the New Concord Silver Cornet Band.

In college, having mastered the usual Latin and Greek, he began learning Hebrew with a small class, and continued studying privately with a teacher in Zanesville, 18 miles away, for three years while working in his father's store. In 1872 his family sent him to Yale for advanced study.

Yale was the first American school to grant the PhD degree, in 1861, and had conferred only 35 before Harper graduated in 1875. Lacking the background of his older classmates, he nonetheless caught up with them and successfully completed his dissertation entitled, "A Comparative Study of the Prepositions in Latin, Greek, Sanskrit, and Gothic."

Hebrew remained Harper's first interest. After teaching classics at Masonic College in Macon, Tennessee, and Denison University in Granville, Ohio, he was offered a position teaching Hebrew at the Baptist Union Theological Seminary in Chicago. Still only 22, he was younger than many of the seminary students in his classes. In his first year, he not only taught a full schedule, but took classes to complete a BD degree, and in 1880 he received a full professorship.

I have a plan which is at the same time unique and comprehensive, which I am persuaded will revolutionize university study in this country.
— William Rainey Harper

Harper transferred his excitement about Hebrew to his students, convincing them to take classes in Hebrew, Sanskrit, and Chaldee and to come back for additional language sessions during Christmas and summer vacations. He arranged to use the seminary building for his own summer school, drawing 23 students the first year and 65 the next. The success of the program led to a second summer school at Chautauqua in 1883. By 1889 he had five schools in separate cities, with courses covering Arabic, Assyrian, New Testament Greek, the Ancient Versions, and the Old and New Testaments in English. At the same time, he founded a correspondence school for those who could not attend in person, opened a printing office to publish lesson outlines and manuals, and organized a group of 70 professors in the U.S. and Canada into the American Institute of Hebrew.

As Harper became better known, he began attracting the interest of Yale. The BUTS trustees feared they could not hold onto him and offered him the presidency of the financially troubled University of Chicago in hopes that this challenge would keep him in Chicago. Instead, Harper accepted a chair at Yale and took his schools and printing office with him to New Haven; the original University of Chicago soon after foundered in bankruptcy.

When the American Baptist Education Society formed two years later to plan a new Baptist university in the midwest, Harper was invited to join a committee of nine to plan the institution. John D. Rockefeller had met him in 1886 and was impressed with his energy and ideas. Rockefeller supported the Baptists' plans, although initially only for an undergraduate college, and offered an initial $600,000 for endowment if they could raise another $400,000 from other sources. A board of trustees was formed in 1890, and one of their first actions was to nominate Harper as president.

Harper envisioned a university, not a college, and would not accept the presidency until he was promised a free hand in developing the institution along the broad lines he wanted. Additional funds would be needed to support Harper's scheme, and Rockefeller pledged another million. Harper officially accepted the presidency in April 1891 and took office on July 1.

Under Harper's plan, the University of Chicago would include an undergraduate college, but senior professors would be freed from heavy teaching loads in order to pursue research. In addition, Harper projected extension work and a university press as key elements of the University. The adult education programs he had developed as an adjunct to his teaching would be given full status within the university's curriculum. While these plans were being developed, Harper had to recruit a complete faculty, amounting to 120 appointments by the time the university opened; oversee selection of a student body (over 3000 students applied for admission, and 520 showed up on opening day); supervise the construction and equipping of university buildings, including classrooms, laboratories, libraries, and housing for faculty and students; and raise money, for the original funds given by Rockefeller and the ABES were quickly seen as inadequate. Harper's appetite for work was legendary, both his ability to plan large endeavors in broad strokes, and his concern for details, such as the planning of the academic ceremonies which he loved.

After the University opened, Harper continued to develop new departments, and in subsequent years added professional schools for medicine, education, and law, primary and secondary institutions which merged to form the Laboratory Schools, and museums for paleontology, anthropology, and oriental studies. Pressing the urgency of needs for more facilities at the spring convocation in 1899, Harper said, "Patience sometimes ceases to be a virtue ... Some of us who ambitiously claimed to be young men when the University opened its doors must now acknowledge that old age is creeping rapidly on. We cannot afford to wait for time."

In 1901 Harper planned a Decennial celebration which included a week of conferences, sermons, and addresses, a thick ten-year report by the president and deans on every facet of the University's activities and programs, and a series of faculty publications which extended to 26 volumes. Cornerstones were laid for six buildings, and an addition to one of the women's dormitories was dedicated. Summing up the accomplishments of the University's first decade, Harper noted, "In these modern times ten years count for as much as one hundred years did formerly." Having seen foundations laid and "the superstructure erected in the rough," Harper looked forward to the next ten years which he hoped would bring "the development of the aesthetic side of life and thought."

Harper never completely recovered from an appendicitis attack in 1904, and early in 1905 his doctors told him they had found cancer. He continued to write, teach, and confer with colleagues until shortly before his death in January 1906. The University community mourned the passing of one who had in every sense shaped the spirit of the institution.