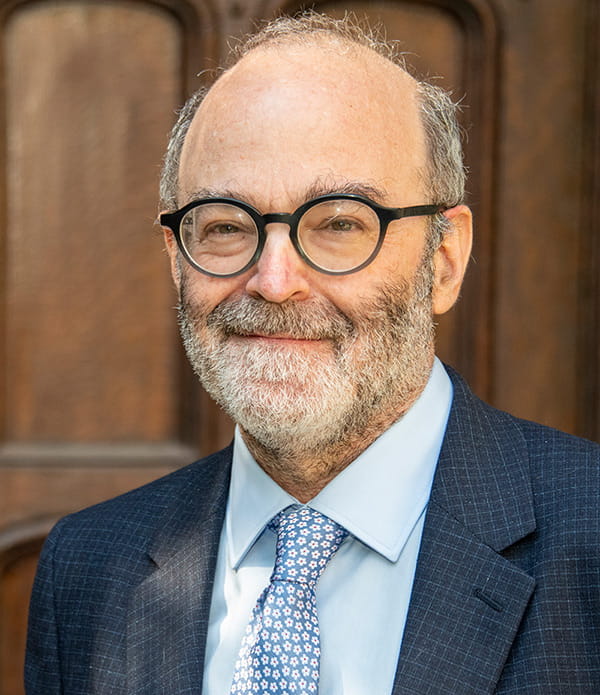 James Robinson is the Dean of the Divinity School for the 2021-2022 academic year. His research focuses on medieval Jewish intellectual history, philosophy, and biblical exegesis in the Islamic world and Christian Europe. His main interests lie in the literary and social dimensions of philosophy, the relation between philosophy and religion, and the interactions between the Jewish, Islamic, and Christian intellectual traditions. He is also appointed in the Program on Medieval Studies, Religious Studies, Fundamentals: Texts and Issues, and the Joyce Z. and Jacob Greenberg Center for Jewish Studies, and he is an affiliated member in the Department of Near Eastern Languages and Civilizations.

Robinson has published four books and three edited volumes: Samuel Ibn Tibbon’s Commentary on Ecclesiastes, The Book of the Soul of Man (Texts and Studies in Medieval and Early Modern Judaism 20. Tübingen: Mohr Siebeck, 2007); (editor) The Cultures of Maimonideanism: New Approaches to the History of Jewish Thought (Leiden and Boston: E.J. Brill, 2009); Asceticism, Eschatology, Opposition to Philosophy: The Arabic Translation and Commentary of Salmon b. Yeroham on Qohelet (Ecclesiastes) (Leiden and Boston: E.J. Brill, Karaite Texts and Studies, 2012); The Arabic Translation and Commentary of Yefet b. ‘Eli the Karaite on the Book of Joshua (Leiden and Boston: E.J. Brill, Karaite Texts and Studies, 2014); Sefer Nefesh ha-Adam: Perush Qohelet li-Shemuel ben Yehudah Ibn Tibbon  (Jerusalem: World Union of Jewish Studies, The David and Amalia Rosen Foundation, Sources for the Study of Jewish Culture, 2016); (co-editor) Medieval Jewish Philosophy and Its Literary Forms  (Bloomington: Indiana University Press, 2019); (co-editor) Maimonides’ Guide of the Perplexed in Translation: A History from the Thirteenth Century to the Twentieth (Chicago: The University of Chicago Press, 2019).

Robinson earned his M.Phil from Oxford University and an M.A. and Ph.D. from Harvard University.