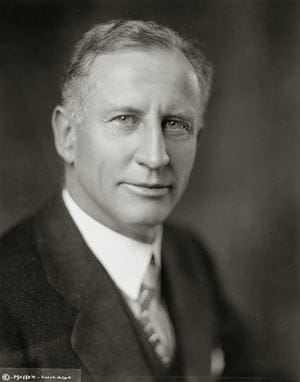 When Ernest Burton died in 1925, the trustees recognized that he was the last member of the original generation of faculty members who could serve as chief executive. Looking for a new president outside the University for the first time, the trustees sought someone young and energetic, having solid credentials and commitment to research, but with strong sympathies for students and able to make effective public appearances.

After considering a number of well-known university and college presidents, the trustees found their man a short distance north in Madison, Wisconsin. Charles Max Mason, a mathematical physicist at the University of Wisconsin, had little experience in university administration, but received high praise from his faculty colleagues. He had managed a huge research team during World War I to develop submarine detectors. And, he was a vigorous competitor on the golf course, to the surprise and delight of some of the University's benefactors.

Mason grew up in Madison and attended the University of Wisconsin. He was a champion high-jumper, enjoyed sailing, canoeing, and skating, played bridge and billiards, and later learned to play the violin. In college he took an interest in mathematics, and after teaching high school for a year in Beloit, travelled to Göttingen to study for his doctorate with David Hilbert, one of the most influential mathematicians of the early twentieth century. When he presented an elegant solution for his dissertation topic in only two pages, Hilbert said it was not sufficient to earn a degree and gave him a more difficult problem. After several months of work, Mason saw the solution in a dream one night and wrote it up when he awoke.

It has been decided that the University of Chicago is to be always in a period of development.
— Max Mason

Mason returned to the United States in 1903 and taught at MIT and Yale before returning to the University of Wisconsin. Although his field of study was pure mathematics, he was transferred after a year to the physics department because of a vacancy. He came to enjoy mathematical physics, although he never agreed with the new relativity theory. He was the first faculty member at the University of Wisconsin to receive an appointment as a research professor.

Mason took a leave of absence during World War I to work on a device to detect submarines, which were wreaking havoc on Allied shipping. At a meeting in July 1917 of the National Research Council, Mason learned of a detector developed by the French navy which could pick up sounds from submarine engines, and he was assigned to head a major project to design, test, and produce a device which could be mounted on navy ships. Mason worked with colleagues at Madison and successfully tested a prototype on a raft in Lake Mendota, then travelled to the east coast for further testing to make it functional on the open sea. Mason's "hydrophone" was ready for use within a year and was the basis for sonar equipment used through World War II.

Mason took over the presidency of the University of Chicago in October 1925. As Chairman of the Board Harold Swift recalled, "here was a president who was a well-known scientist, who might do things differently! The leaders of the city became excited, and the University became very excited. He handled himself well. He met the public well. The idea that a university president might beat almost any member of the Commercial Club in a golf game was something new."

The development campaign begun by President Burton had successfully completed its first phase, raising $6 million for endowment. The second phase, to raise another $11 million for new buildings, was ready to begin. Although it seemed like an abrupt change from his previous activities, Mason pushed forward with public appearances, speeches, and radio broadcasts to raise money and public awareness. Buildings were completed for the Divinity School, the hospitals and clinics, modern languages, and experimental zoology, and a new football stadium was opened which increased seating by 20,000. Work began on new facilities for social sciences, chemistry, mathematics, botany, and the university chapel. At the same time over a hundred new faculty positions were filled, an increase of nearly 20 percent.

Much to the surprise of many at the University, Mason resigned in June 1928 to accept a position at the Rockefeller Foundation. He was chosen to replace George E. Vincent as president, and headed the division of natural sciences until Vincent retired in January 1930. In 1936 Mason was invited to Caltech to assist with the construction of the Palomar Observatory. He became chairman of the Observatory Council when George Ellery Hale, the original planner of the facility, died shortly after Mason's arrival. Mason worked on engineering and technical problems with mounting the 200-inch mirror and calculated compensations for gravitational deformations as it rotated. After the observatory was dedicated in 1948, Mason moved to Claremont, California, and taught at Claremont Men's College for a year before his retirement.