Executive Vice President for Medical Affairs, Dean of the Division of the Biological Sciences, and Dean of the Pritzker School of Medicine 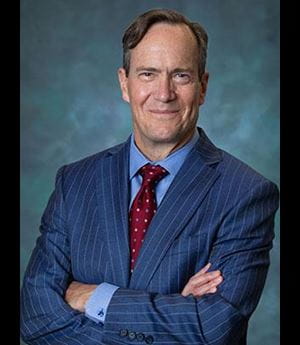 Mark Anderson, MD, PhD, is the Executive Vice President for Medical Affairs, Dean of the Division of the Biological Sciences (BSD) and Dean of the Pritzker School of Medicine at the University of Chicago, where he heads the medical and biological research, education, care delivery, and community-engagement enterprises.

Reporting to University President Paul Alivisatos, Dr. Anderson works closely with leaders across the University and UChicago Medicine (UCM) to lead a transformation agenda aimed at driving growth of the health system and integrating the academic and clinical programs to leverage the strengths of each and enhance their impact. A vital part of these duties is leading efforts to enhance community health, health equity, and access to care for communities in Chicago’s South Side and beyond.

A renowned scholar, physician and caregiver, Dr. Anderson’s research, commitment to education and medical leadership have earned international recognition. He is a leading expert on the mechanisms of cardiac arrhythmias and heart failure, conducting research focused on the role of the calmodulin-dependent protein kinase II in heart failure and cardiac arrhythmias, which are a common cause of sudden cardiac death. He has published more than 160 peer-reviewed journal articles, book chapters and book reviews; given invited talks across the United States and in more than a dozen nations; and been included over many years in the Castle Connolly Top Doctors listing. In 2017 he was elected to the National Academy of Medicine.

Dr. Anderson came to the leadership at UChicago in October 2022 from the Johns Hopkins University School of Medicine, where he served as director of the Department of Medicine, the William Osler Professor of Medicine and physician-in-chief of The Johns Hopkins Hospital. In leadership roles at Johns Hopkins from 2014 to 2022, he oversaw more than 700 full-time faculty members and clinicians across 18 academic divisions, nearly 3,000 staff members and trainees, 300,000 clinic visits, and an annual research portfolio of more than $200 million in the last year. He also led the Department of Medicine’s efforts in securing philanthropy, raising approximately $20 million to $40 million annually.

Before moving to Johns Hopkins, Anderson served as chairman and department executive officer of internal medicine at the University of Iowa Carver College of Medicine from 2005 to 2014, while also leading Iowa’s Cardiovascular Research Center. He served on the medical faculty at Vanderbilt University from 1996 to 2005, where he directed educational and clinical programs.

Anderson received his undergraduate degree in biology with honors in 1981 from Macalester College in St. Paul, Minnesota, and earned a Ph.D. in physiology and an M.D. in 1989 from the University of Minnesota. He later completed an internal medicine residency and fellowships in cardiology and clinical cardiac electrophysiology at Stanford University before joining Vanderbilt’s medical faculty in 1996.